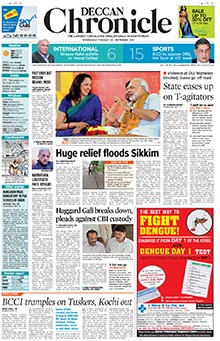 Deccan Chronicle newspaper: As a south-Indian daily, Deccan Chronicle has the fifth largest circulation among English publications in India. With editions in Karnataka, Andhra Pradesh, Kerala and Tamil Nadu, its major support is from urban areas of southern India. It is a cost-effective medium for advertising in south India.

What makes Deccan Chronicle a big draw for advertisers?

Published in Hyderabad since 1938, the Deccan Chronicle is one of most widely read English newspapers in all of south India with a circulation of 13,33,668. Besides Telengana, it is published in Andhra Pradesh, Tamil Nadu, Karnataka and Kerala through 11 editions from Hyderabad, Vijayawada, Rajahmundry, Vishakapatnam, Anantapur, Karimnagar, Nellore, Chennai, Coimbatore, Bengaluru and Kochi

Deccan Chronicle newspaper advertisement. Like other newspapers, Deccan Chronicle offers a wide variety of categories for advertising. These include: Matrimonial (Groom Wanted and Bride Wanted), Property (real estate for sale, purchase, rent or lease), Situations Vacant, Change of Name, Lost and Found, Tenders, Public Notices, Business, Retail, Finance, Obituary, Remembrance among others. Each of these has different rates and some offer special rebates from time to time.

Like other newspapers also, Deccan Chronicle is in heavy demand for Display ads. Charged by the square centimetre, these ads can be published in any colour or size on any page and even on any position – from top to bottom and from left to right of a page – if the budget permits.

Similarly, there are pages dedicated to classified ads in Deccan Chronicle of both kinds:

Charged by the word subject to a limit of five lines, these are normal, black & white run-on text ads. Advertisers can enhance them at extra cost which will allow the use of bold lettering, ticks, colour, and/or screen to improve visibility.

Charged by the square centimetre, these ads cost more. They can be in black & white or colour text formats and enhance the design with images. The ad text can be composed directly online through the use of simple templates. The advertiser can also upload the ads in PDF/JPEG/EPS formats.

To book newspaper classified advertisements as well as all other kinds of advertisements with the utmost ease from your home or office computer instead of all the trouble and time-wastage of contacting the busy Deccan Chronicle people by reaching the instant online facility Myadvtcorner which has media contacts all over India at its fingertips. Thus it is aware of periodic discounts for certain kinds of advertisements and pass these on at no extra cost to the advertiser.

So, when you think of advertising in English in the south, think of Deccan Chronicle and contact Myadvtcorner.

Enter your Email
Please fill the details and we will send password to your Email OR Mobile.