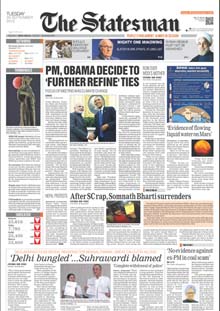 Advertise in The Statesman to reach East Indian markets

The English daily newspaper, The Statesman, is published in Kolkata and Siliguri (West Bengal), and Bhubaneshwar (Odisha) in addition to New Delhi which houses its national editorial office. In 1875 it was launched as a descendant of The Friends of India (founded in 1818) and now has a combined daily circulation of 1,59,680 copies for April 2013-March 2014) according to the Audit Bureau of Circulation. The Sunday Statesman's circulation reaches 2.3 lakhs.

The Statesman newspaper advertisements have similar categories as other newspapers such as Matrimonial, Property, Recruitment, Lost and Found, Change of Name, Business, Retail, Finance, Motor Vehicles, Obituaries and Remembrances among many others. All of which have different rates and they differ according to the editions.

To book ad in The Statesman newspaper, advertisers have the same three options in formats as with almost every other newspaper. These are:

The Statesman text classified ads: Charged by the word, these simple, black and white text ads are printed in a run-on format. Eye-catching enhancements such as tick, colour, bold and screen can be availed of at extra cost.

The Statesman display classified ads: Charged by the square centimetre, these are costlier ads which can be in colour or black and white and permit the use of visuals and logos. The ad text can be directly composed online through easy templates. The ads can be uploaded in PDF/JPEG/EPS formats.

The Statesman display ads: Also charged by the square centimetre, these are the costliest ads are restricted only by the budgetary limitations. Otherwise, there are no restrictions on the size, colours or pages â€“ even the positions on each page.

The Statesman also has the following supplements:

The Statesman offers advertisers the choice of its editions in Kolkata, New Delhi, Siliguri and Bhubaneswar

Book advertisements in The Statesman through MyAdvtCorner.com

Advertisements can also be placed in these supplements in which the rates are cheaper than the main paper but different from each other.

These large numbers of options with regard to rates and differences in them, could be confusing, stressful and time-consuming for even many lay advertisers. To make things easier, they can use their personal or official computers to access instant online services of Myadvtcorner. This advertising facility is fully geared with media experts constantly updated with the latest rates and requirements of all newspaper in India-including whatever discounts may be offered from time to time, which advertisers can benefit from at no extra cost.

This online advertising facility's connectivity also ensures the publication of advertisements will take place in the required edition on the appointed date provided a couple of days' notice is given.

Enter your Email
Please fill the details and we will send password to your Email OR Mobile.